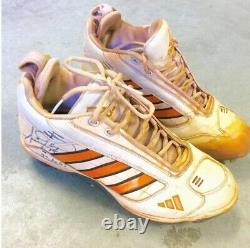 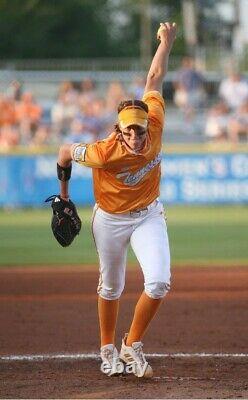 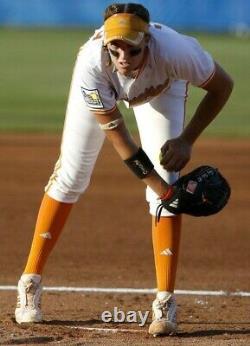 These are autographed by Monica. These are one of a kind and probably the only college worn item of Monica in the market. These cleats are College Softball Hall of Fame worthy!! I collect anything of Monica and will be listing more over the next few weeks.

Much sought after by many colleges, Abbott decided to go to the University of Tennessee, with their treatment of female athletes an influencing factor. [2] Abbott pitched for the University of Tennessee Lady Volunteers softball team from 2004 to 2007 and majored in communications. Abbott became Tennessee's first All-American when selected as a Louisville Slugger/NFCA First Team All-American. In 59 appearances, Abbott was 4510, compiled a 1.03 earned run average with 44 complete games and 24 solo shutouts, four no-hitters and a perfect game. She struck out 582 batters in 352 innings.

Following the season she was named SEC Freshman of the Year. Abbott became the third pitcher in NCAA history to notch 500 strikeouts in a season. Abbott became a two-time first-team Louisville Slugger/NFCA All-American and All-South Region selection after going 509 with a 0.52 ERA in 392.0 IP. She broke her own record for single season wins with 50 and had 603 strikeouts thus becoming the first pitcher in NCAA Division I history to record 500 strikeouts in a season twice in her career.

Abbott's 531 strikeouts made an unprecedented third year in a row of over 500. Abbott struck out an NCAA Single Season current Record of 724 batters. [3] She had 23 no-hitters and six perfect games and was named the 2007 USA Softball Collegiate Player of the Year and the Women's Sports Foundation Sportswoman of the Year award for Team Sports athletes.

[4][3] She also was the 2007 Honda Award Winner. She guided UT to its first SEC title and a berth in the CWS championship, where they lost to top-ranked Arizona in the best-of-three series final. Once again she was named to the all-tournament team.

Abbott set career and single season NCAA records her senior season with 189 victories, 2,440 strikeouts, 112 shutouts, 253 appearances and 1,448.0 innings pitched. [3] She set a Single Season Record in Strikeouts of 724. [7] Abbott was the first pitcher in NCAA Division I history to record 500 strikeouts in all four years of her collegiate career.

She was inducted in the Tennessee Athletics hall of fame. [8] She was Tennessee's first softball All-American in school history and was named to the All-Women's College World Series team three times.