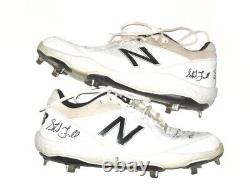 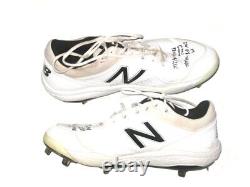 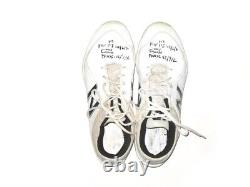 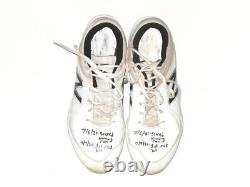 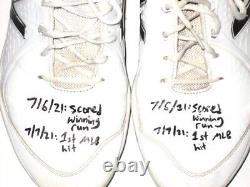 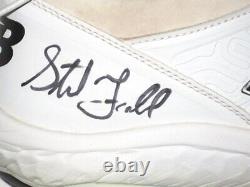 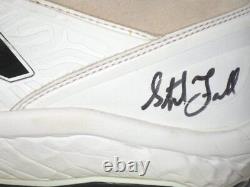 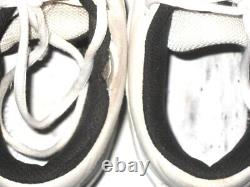 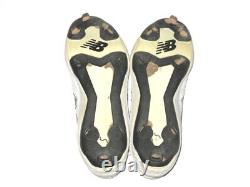 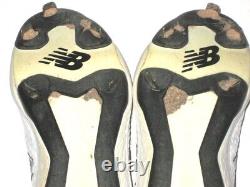 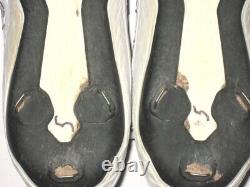 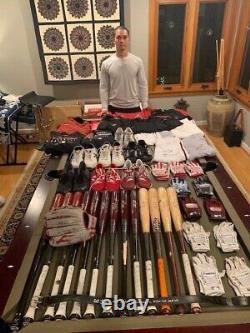 Stuart Fairchild 2021 Arizona Diamondbacks Game Worn & Signed New Balance Baseball Cleats - Worn for MLB Debut & 1st MLB Hit! Stuart Fairchild is an outfielder for the Cincinnati Reds. He was drafted by the Reds with the 38th overall selection in the 2017 Draft. He was their 2nd round pick and their 3rd pick overall.

He played his college ball at Wake Forest. After beating up on pitching in the ACC, the Reds sent him to Billings after the draft. 303 with 12 stolen bases.

Fairchild has also been a member of the Seattle Mariners, Arizona Diamondbacks and San Francisco Giants. Fairchild completed his Wake Forest collegiate career as a three-time All-ACC pick, All-American, and second-round MLB Draft selection. He had his best season in his junior year when he was a consensus first team All-American, finishing the season with a.

360 average, 19 doubles, 17 home runs, 67 RBIs and 21 stolen bases. He started all 63 games and recorded 94 hits, a mark which ranks tied for sixth all-time, led the ACC and ranked fourth in the country. Fairchild also led the ACC with 166 total bases and finished in the top five in the league in runs (65), average.

His 53 doubles rank tied for seventh in program history. Fairchild also had two error-free seasons in the outfield and finished with a. In 2019, Fairchild split the season between Class A Daytona and Class AA Chattanooga. The talented outfielder ranked among the organization's minor league leaders in doubles (29, 4th), extra-base hits (44, T4th), total bases (177, 6th), HR (12, T7th), RBI (54, T7th), walks (44, 9th) and runs (57, T10th). Following the season, Fairchild played for Glendale in the prestigious Arizona Fall League where he tore it up. 353, 4 2b, 6rbi, 1sb. He also entered the 2020 season rated by Baseball America the player in the Reds' minor league system with the best strike zone discipline. For his stellar effort, he was invited to Reds Major League Training Camp on January 10th, 2020.

On August 31, 2020, the Reds traded Fairchild, along with Josh VanMeter, to the Arizona Diamondbacks for relief pitcher Archie Bradley and cash considerations. The Diamondbacks added him to their 40-man roster after the 2020 season. He was assigned to the Triple-A Reno Aces to begin the 2021 season. Fairchild was promoted to the major leagues for the first time on July 6, 2021. Fairchild made his MLB debut that night as a pinch runner for Stephen Vogt and scored the game winning run after David Peralta's walk-off hit-by pitch in the bottom of the 9th.

The following day, Fairchild notched his first career hit, a line drive single off of Colorado Rockies pitcher Lucas Gilbreth. 625 in 16 at bats.

He had three hitless at bats for Seattle. He was designated for assignment on May 12, 2022. On June 11th, 2022 the Cincinnati Reds acquired Fairchild for the second time in his career. Fairchild was assigned to Triple-A Louisville where he played in 20 games for the Bats. Fairchild was crushing the ball when he made contact, with 4 doubles, a triple, and 7 home runs in 79 plate appearances.

He's capable of playing all three spots in the outfield, and he's got speed that could be used as a pinch runner if that's what is needed. On July 12th, 2022 the Cincinnati Reds recalled Fairchild from Triple-A Louisville after placing Albert Almora Jr. Fairchild hit his first MLB Home Run vs.

2-Time All-Star Pitcher Luis Severino and the New York Yankees in his first plate appearance for the Cincinnati Reds on July, 13 2022. For the season, he has 5 HR's in only 60 At-Bats and is slugging a. The featured white and black New Balance Baseball Cleats were game worn by Stuart Fairchild for his 1st official Major League Hit when the Arizona Diamondbacks faced the Colorado Rockies on July 7th, 2021.

He hit a line drive single off Colorado Rockies pitcher Lucas Gilbreth. He also wore these Cleats the previous day (July 6th, 2021) when he made his MLB Debut and pinch ran for Stephen Vogt and scored the winning Run after David Peralta's walk-off hit-by pitch in the bottom of the 9th for the Diamondbacks! The talented outfielder has signed the Cleats and added "7/6/21: Scored winning run, 7/7/21: 1st MLB Hit" in black. Awesome and unique Pair of Cleats obtained directly from one of Baseball's Top Prospects & a Future MLB Star! If Fairchild continues his tear with the Reds, these Cleats are some investment!!