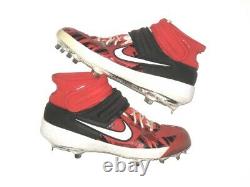 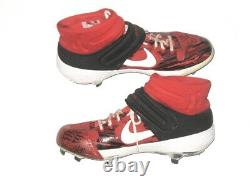 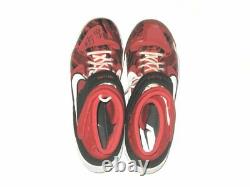 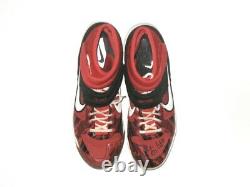 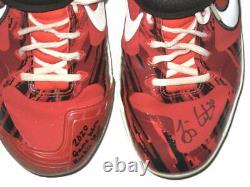 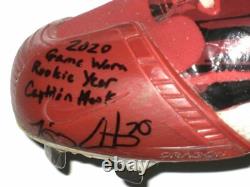 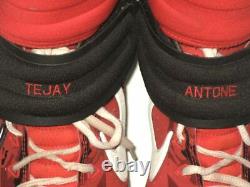 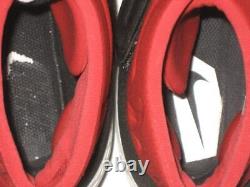 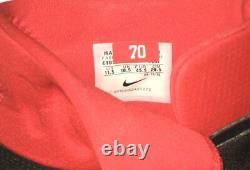 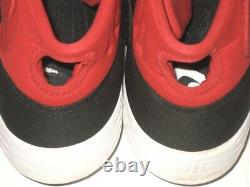 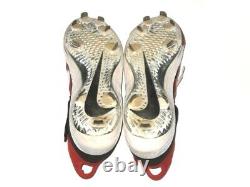 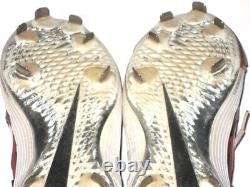 Tejay Antone 2020 Cincinnati Reds Rookie Game Worn & Signed "Captain Hook" Custom Nike Baseball Cleats. Tejay Antone is a pitcher for the Cincinnati Reds. The Reds selected Antone in the 5th round of the 2014 Major League Baseball draft out of Weatherford College. He had pitched at TCU in 2013 before transferring. He worked his way up through the system, pitching for the Arizona League Reds and Billings Mustangs in rookie ball in 2014 after the draft. The next season he posted a 2.91 ERA in Low-A Dayton in 158.0 innings. In 2016 he moved up to Advanced-A Daytona, making 25 starts with a 3.51 ERA over 151.1 innings before making the final start of the year for Triple-A Louisville, giving up one run in 5.0 innings. In 2017, Antone tore the UCL in his pitching arm and had to undergo Tommy John surgery. It would cost him the entire season in 2017 and the first five weeks of 2018. When he did return to the mound, the then 24-year-old joined the Daytona Tortugas again in the Advanced-A Florida State League. While there he posted a 4.03 ERA in 96.0 innings. In 2018, Antone jumped up to the Double-A level, making 13 starts with the Chattanooga Lookouts. The right-handed starter posted a 3.38 ERA in his 74.2 innings with the Lookouts before he was promoted to Triple-A. In 2019 the highest level of the minors was also using the juiced ball and both the International and Pacific Coast League's saw home runs, runs scored, and ERA's explode. For Antone, he was like most other pitchers who jumped up during the season - he saw his ERA shoot up quite a bit. In his 14 games and 71.2 innings he posted a 4.65 ERA. If that ERA sounds high, it is and it isn't. The league average ERA last season was 4.90 in the International League - so Antone was actually above-average at preventing runs. He also posted his highest strikeout rate at any level while in Triple-A. Antone has a fastball in the low to mid-90's which has good movement on it and generates a high rate of ground balls - he's got a career ground ball rate of 55.3% in the minors (In 2019 the MLB ground ball rate was 42.9%).

He also brings a solid change up and curveball to the table. But perhaps the biggest thing for Antone in 2019 was the development of his slider once he reached Triple-A. The pitch was a key to his rise in his strikeout rate. Over his last two starts in Triple-A during 2019 he struck out 19 batters and walked just one.

He made his major league debut for the Cincinnati Reds on July 27, 2020, giving up 1 run in 4.1 innings of work against the Chicago Cubs. He competed his rookie season with a 2.80 ERA and 45 Strikeouts in 35 Innings. He was an integral part of the Reds success down the stretch of the 2020 season.

Antone was merciless against opposing hitters. The right-hander came right at batters early and often, essentially daring them to take a swing. When it came to soft contact, Antone was one of the best on the team.

According to FanGraphs, his 25.6% soft contact was better than both Sonny Gray and Trevor Bauer. Antone's strikeout-rate was quite impressive as well. Owning a K-rate of 31.9%, Antone bested both Luis Castillo (30.5%) and Tyler Mahle (29.9%) in that category and was off the pace set by Bauer (36.0%), who is one of the best pitchers in the game.

In 2021, Antone was the Reds best reliever. The right-hander made 23 relief appearances while battling injuries, and he posted a 2.14 ERA and 0.89 WHIP with three saves and eight holds in 33.2 innings. He also struck out 42! The featured size 11.5 red, white and black custom Nike Alpha Huarache Elite Baseball Cleats were game worn by Tejay Antone in 2020, his rookie season as a member of the Cincinnati Reds. Antone completed his rookie season with a 2.80 ERA and 45 Strikeouts in 35 Innings.

The dominant reliever has signed the Cleats and added his number "70" and has also added "2020 Game Worn Rookie Year Captain Hook" to the right cleat in black. The inside size label features a Cincinnati Reds player issued "70" label. The right cleat is embroidered with "TEJAY"on the mid foot strap while the left cleat features "ANTONE" in red letters.